St. Mary School - 1890
In order that their children might receive religious instruction in the language with which they were familiar and so that they themselves could assist in instructing the children, a number of German Catholics established a parochial school in 1890. As soon as Fr. Forkenbrock began his pastorate, he obtained the services of the Sisters of St. Francis of Assisi of Milwaukee. Four sisters began teaching about a hundred students in September 1894. Because of increased enrollment in 1897, the first building was replaced by a three-story brick veneered structure. The third floor and basement were used as living quarters for the Sisters and for boarders. In 1908, three classrooms, two music rooms and a chapel were added, doubling the size of the building.
For five years, from 1915 until the discontinuance of the high school in 1920, the high school department was affiliated with eh Catholic University, Washington D.C., and each student tool the examinations provided by the University, Graduates received their diplomas from the University. The first lay teacher since 1913 was Mrs. Herbert Meyer, who came in 1958. In 1965, two lay teacher and four Sisters were on the faculty instructing 147 students. The Friends of St. Joseph and other benefactors added multiple sets of play equipment, basketball and ball courts to Runion Park 1993 and then donated the equipment to City of New Hampton. 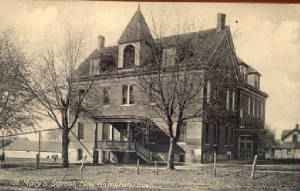 St. Joseph School - 1904
St. Joseph School and convent were built in 1904 under the supervision of the pastor, Father Richard Slatter, as a cost of $15,000. The school was staffed by many religious communities in its history: the Dominicans were present until 1911, followed by the Franciscans until 1917, the Sisters of Charity, BVM until 1985 and the School Sisters of Notre Dame in 1987. In November of 1921, St. Joseph School experienced a fire that destroyed the school records. Because the school was destroyed, the students temporarily attended St. Mary’s School, New Hampton, a school that had been organized in 1890 to serve German-speaking Catholics.
In the spring of 1922, work began on a new St. Joseph School. The brick school included six classrooms and a gymnasium,- auditorium was built at the cost of $6,731.67. In 1955, the parish acquired the quarter block across the street from the school. In 1955/56 a large addition was added to the east side of the school which was an addition of two classrooms, a library, a kitchen, and the lunchroom. In 1959, the first lay teacher joined the faculty, her name was Mrs. Marie Whalen. Four Sisters and four lay teachers taught 276 students in 1965. 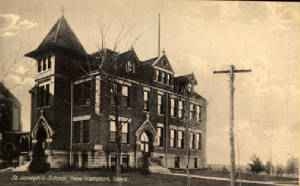 St. Joseph Community School
St. Joseph School and St. Mary School consolidated in 1969, following the closing of St. Mary School. At that time, the school name was changed to St. Joseph Community School. This arrangement included all other surrounding parishes which included, St. Bernard of Alta Vista, Our Lady of Lourdes of Lourdes, Immaculate Conception of Elma, Mt. Carmel of Lawler and Assumption of Little Turkey. St. Joseph Community School was then considered a regional Catholic school.
During the summer of 1992, the former convent was converted to Sunrise Preschool. The renovation, furniture, equipment and supplies were all donated by parishioners and friends of Sunrise Preschool.
Expansion and renovation marked the beginning of the twenty first century of St. Joseph Community School. The 1.6 million dollar project began in 1997. The church – school addition connected the church and school. The addition contained an elevator that provided accessibility for the entire church and school complex. The upper level included four classrooms and space for art. A multi-purpose center (Parish Center) was built directly west of the school. It provided space for physical education, sports events, and a stage for music productions.
In 2005 the old gymnasium conversion and reconstruction into levels of education space began. The first floor included one large classroom, large soundproofed orchestra music room and smaller multipurpose room. The second floor is used entirely for library/media center and computer center. The 1995 addition (old media center) now became Sunrise Preschool which was moved from the old convent. This addition was completely renovated with the addition of a restroom and office. The project also included the renovation of all bathrooms in the 1924 and 1956 wings of the school. The project cost was $300.000. 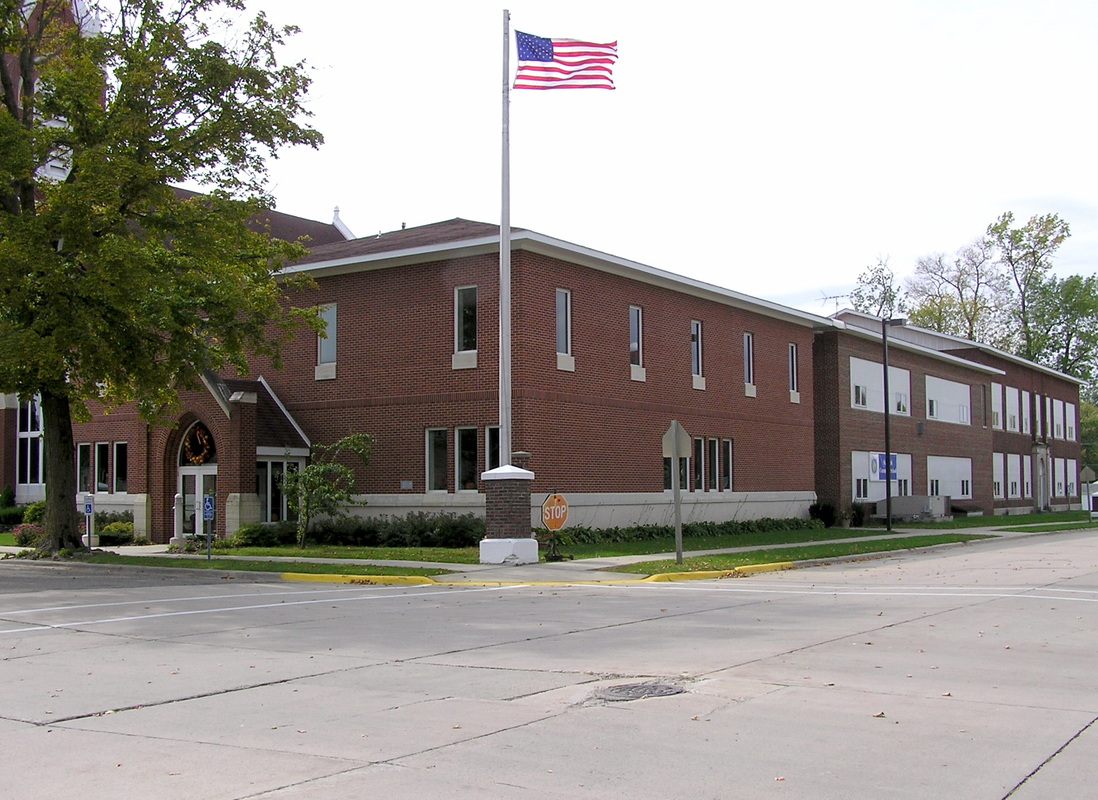